Oil obtained from the cold pressing of sunflower seeds. It contains a very high percentage of unsaturated fatty acids. Those present in the greatest quantities are oleic acid (32%) and linoleic acid (54%). Another important part consists of vitamin E, which gives this oil marked antioxidant properties. Sunflower seed oil is recognised in cosmetics as a regenerator of epidermal cells, thanks to its high emollient, moisturising and refreshing power. It is also indicated as a rebalancing agent for sensitive or irritated skins. 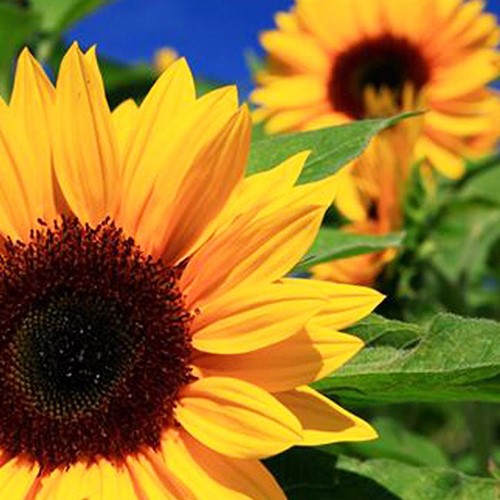 Annual plant belonging to the Composite tubuliflore family originating from Mexico and Peru, which can reach heights of up to two or three metres. It is characterised by a straight tubular stem and broad oval leaves, both covered with a sparse, hard fuzz; the flowers are large and clearly visible with golden yellow petals and they follow the direction of the sun during the day. The flowers open at the height of summer and contain a large number of seeds, which are cold pressed to give us sunflower oil.

The name “sunflower” comes from the curious behaviour of this plant, the flowers and the youngest leaves of which turn during the day towards the sun as it moves (heliotropism), in order to catch its rays. Since ancient times, according to certain cultures, especially of oriental origin, the sunflower is considered to be a symbol of joie de vivre and immortality, while it was an object of worship by certain ancient civilisations in South America, which considered it to be the earthly embodiment of the sun.

SUNFLOWER OIL is present in these products