Emollient, moisturising and nourishing. Sweet almond oil is obtained by cold pressing organic almond kernels, without using chemical solvents. Cold pressing is important, because this production method extracts all the active ingredients and functional substances contained in the almond into the oil, maintaining the original beneficial properties. It is particularly rich in unsaturated fatty acids, such as oleic and linoleic acid, as well as vegetable sterols, including betasitosterol. It is thanks to its particular composition that, when applied to the skin, it interacts delicately with the hydrolipidic film of the skin, nourishing, moisturising and conveying immediate wellbeing to dry and chapped skin. 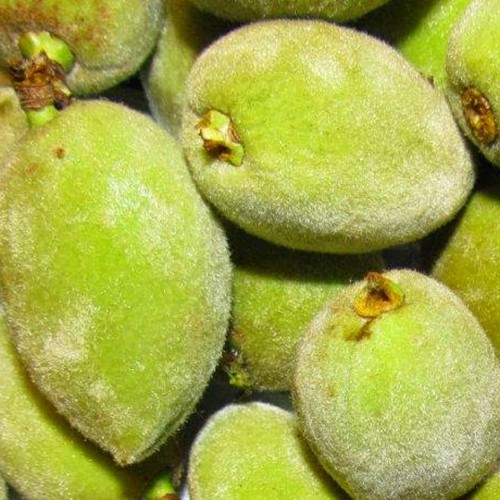 A trees belonging to the Rosaceae family, originating from Asia Minor. The very visible flowers bloom with the first warmth of spring and present a white or flesh coloured corolla made up of five petals tinged with a vein of red. The fruit is a hard, oval green drupe with a woody endocarp which contains the almond and it is from the almond that the oil is extracted. This oil has been used in cosmetics since ancient times for its marked nutritional and emollient, but non-comedogenic properties.

Almond oil was one of the first oils to be used in cosmetics. The Ancient Egyptians used it as a nourishing base for the preparation of scented and unguent oils.

SWEET ALMONDS is present in these products